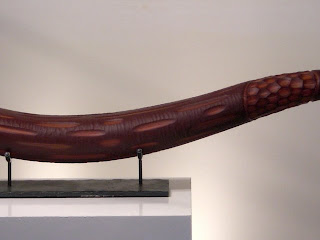 A few years ago, Lino Tagliapietra, created sinuous forms from blown glass and sculpted them. Lino, as he's called in glass circles, is notable to the American glass collecting community for his collaborations with Dale Chihuly at Pilchuck Glass School and The Studio of the Corning Museum of Glass, to name a few prominent US venues where he imparted his skills in glass blowing. The big deal about Lino is that he's the first artist from Murano, Venice, that region in Italy that guarded the secrets of glass blowing for centuries, to share his methods with the world. His work has been shown in museums and galleries all over the world, and he continues to inspire glass artists today. One of his admirers, Alessandro Casson, developed a series of sinuous forms from blown glass and sculpted them. Using parallel methods as Tagliapietra, Casson's work uses hot techniques to develop the form and pick up color through canework. Final development of the form employs cold engraving methods. His work draws the eye in an attractive and appealing manner, inspiring touch. 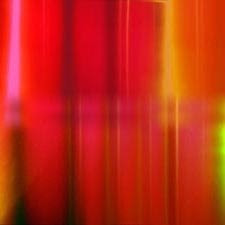 Gary Clemenceau, made his gallery debut with this exhibition. He is one of a pair of artists invited because his work did not use glass as a medium, rather as a reference. "City of Glass" is a set of digitally created images exploiting color, light and the illusion of reflection. His images, sealed within a matrix of polycarbonate and aluminum, have a compelling visual draw. Saturated and slick, Clemenceau's work ensures his status as a successful debutant!

Casson and Clemenceau's works are beautifully crafted and have rare presence. I couldn't miss the opportunity to show them!
Posted by Micaëla at 07:42

Hi Micaela,
Not sure if you are back from your trip. Hope it was glorious! Just wanted to tell you I read your blog and I love it and adore you!! (Am I being too bold??) Really, you are a wonderful writer and are smart and your ideas are right on, honest and clearly articulated. I am forwarding it all to Jim since it's much about glass. It's exciting to be part of your gallery. Thanks again.
Looking forward to seeing you in Chicago for SOFA - and can't wait for Miami as well.
Best to you,
Lorraine

the two assemblage [pieces promised have been all packed and ready to go for a month or so so when you are ready for them let me know and I will put them in the mail! Clay things are just starting to come out...it is a slow process but I will give you first choice if you would like to buy some but like I told you before, you gotta buy them up front as that is why I make them...to pay for my three boys. Saw the blog yesterday, nice job, and indeed you are a babe! It is so nice to be an artist, we can say things like that and not get into trouble. We are all supposed to the letches or people recognize we all have an excellent estheic sense. dgilh