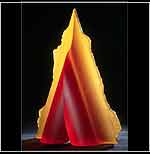 I am very saddened by an email I received this afternoon. From Jock Walker, brother of James Walker, it read:


To all of James' friends,
I am his brother Jock and I am struggling with the task of who to notify.  So I am sending this email to let all of those on his email contacts know the news.
James died in the Hospice house in Hastings on April 5th very early in the morning.  He had been suffering from mesothelioma which was the result of asbestos exposure from his early days of working with glass in Auckland.  His fight with this cancer had lasted for some time and through it all he maintained his sense of humor.  But in the end his passing was a relief to him and all of us who were here giving him a hand.
James is now home at his place in Wairoa and will be here until we have a brief ceremony this Saturday at 4PM.  Afterwards we will retire to the saloon in Wairoa for a social time and a band of friends will be playing the blues.

Jock did not discuss his brother, James' work, and I am sure no one can fully appreciate the contributions made by James Walker to the glass sculpture community. I will try to describe a few of them.
Born in Chattanooga, Tennessee in 1948, James Walker found his way West to California, and didn't stop. Awarded a Bachelor of Science (Marketing, with Honors recognition) in 1971 from the University of Illinois at Champaign-Urbana, he received a Master of Philosophy of Fine Arts and Design (with First Class Honors) in 1989 from the University of Auckland, Auckland, New Zealand.
Over the past quarter century, James Walker designed and produced stained glass, for architecture and as autonomous art objects and. As recently as 2008, his work progressed into the sculptural realm while utilizing the mass, optic and color qualities of cast glass.

Walker's work with glass began when he set up Sunbeam Glassworks, a glassblowing facility in New Zealand, with his colleague, John Croucher.  After several years, Walker sold out his interest to set up his own studio to focus on design and making stained glass windows.

During the early 1980s, Walker's work with stained glass and its integration into architecture developed under study with prestigious associations: Professors Ludwig Schaffrath and Johannes Schreiter. Walker was invited to contribute work to Schaffrath's 60th birthday exhibition, resulting in an invitation to work alongside Schreiter as his Teaching Assistant. On the recommendation of Schaffrath and Schreiter, Walker received an artist-in-residence stipendium at Wilhelm Derix Glasgestaltung. Throughout the 1980s, Walker completed numerous window commissions in public and private buildings. Various awards and grants underscored his success, notably, the Auckland Architectural Association's annual award for successful collaborations with Ian Athfield, new Zealand's leading avant-garde architect (it was an exceptional award - recipients are generally selected from within the architectural community). 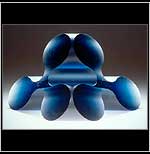 Walker's career in glass eventually led him to Pilchuck School in Washington, where he was offered a Teaching Assistantship. While there, he met Stanislav Libensky, Czechoslovakia's reigning glass sculptor and national treasure, who encouraged and admired Walker's work.  Walker and Libensky developed a subsequently long lasting friendship, resulting in Libensky's invitation to Walker to study with him and Jaroslava Brychtova in Pilchuck's Masters Class the following year. Walker emerged named the most outstanding pupil, and went on to live in the Czech Republic for much of the 1990s to continue the development of his sculptures in cast glass. Around 2006, Walker left the Czech Republic to return to New Zealand and continue his work with glass. While he seemed less interested with pursuing work with cast glass, his new work derived inspiration from the growing urban landscape of his home, making visual puns and commentary using signage and metaphors related to repurposing materials, all the while working with glass.
I will remember James Walker as a wonderfully jovial man who seemed to live without a care in the world, and was loved by all. In the 1970s, Walker sailed the Pacific Ocean with his brother, Jock, from San Diego to New Zealand. His professional contributions include the development of gaffer glass.  His friends were too many to count, as he was a genuine and friendly man.  Tall and large, with an solid and muscular appearance, his entrance was large like him, always beaming with a bright and very warm smile. His blue eyes constantly shone behind rimless glasses, his ruddy cheeks and skin carried an enviable bloom of good health.
A quiet pioneer of the glass community, James Walker was a Southern gentleman whose chosen medium of expression with glass was genuinely artistic, innovative and original.
A recent resume of Walker's professional accomplishments can be found at this link:
http://www.walkerjames.com/artist.html.
Images (top to bottom):
Posted by Micaëla at 21:21

Email ThisBlogThis!Share to TwitterShare to FacebookShare to Pinterest
Labels: Walker

Thanks for posting such a nice summary of James' career. I hope to see you soon.