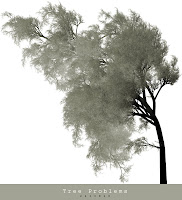 Gerald Cannon writes about his concern with methods of communication in his latest statement, "Essentially, this translates into issues of how all forms of code are constructed and manipulated. Utilizing digital coding presents a thoroughly new medium with which to reexamine all codes."

"Confusion and questions seem to proliferate in encoding and decoding. Even digital coding exposes questions of how one might accurately distinguish discrete (digital) systems from analog systems. My sense is that all perceptual systems are sampling systems (i.e. discrete in fundamental structure). Further, I feel that these coding systems are prone to “sampling” errors. Hence, our perception of motion, sound, color, even reality itself are not analog, as we conceive, but often even less accurate “discrete” systems than computer technology provides. All codes then are little more than algorithms in form and fact and, hence, like art itself, only mimic reality and feign truth via reductivist methods."

"At this point in time these codes can be digitally woven into meta-codes where sound creates image and words create motion, etc., etc. This almost magical misdirection of intent leads to questions about how we perceive along with what we perceive. My work weaves this misdirection into art that often reveals its own flaws and the flaws of the codes connecting it to other systems. It can lead to two simultaneous, though mutually exclusive, conclusions, hence questioning even its own viability as art or communication."

"My work premise has been that any thoroughly developed, internally consistent system, followed intently, will lead to a form that is beautiful, valid expression - in other words, art. What we have regularly accepted as truth and/or reality often has little to bring to bear on the truth and reality of this literally unfounded outcome. As I construct such systems, they tend to fail as simple aesthetic expression and/or self-aware ironically bound expression. In existing on both levels, they tend to fail on one level or the other. The end product is a kind of phantom expression of any thoroughly coded communication as art and vice versa. Little actually validates its value as either."

Cannon's work will be on exhibition at the 2009 invitational show of alumni from University of New Orleans MFA grads, along with works by Peter Halley, among others.

Email ThisBlogThis!Share to TwitterShare to FacebookShare to Pinterest
Labels: 2009